Malahat’s summer 1985 issue is a rich picnic basket of reading materials filled with literary forms and styles to suit the tastes of any reader—perfect for taking to the beach. As an appetizer, there are eight poems about angels by Gail Harris that complement the cover photograph (by David Tasker) of a divine cemetery statue.

As a celebratory cocktail, there is a story by P. K. Page titled “Birthday,” in which the character muses about aging the relationship between mind and image.

I won’t be tiresome and will not stretch the food metaphor any further, but I will mention that the diverse quality of the content of this issue is deliberate and is reflected upon in the editor’s “Comment” that begins the magazine. Constance Rooke discusses the role of both specialist and generalist magazines in Canada: “I want The Malahat Review to be a passionate but not a partisan magazine. A literary magazine can have a point of view without dedicating its pages entirely to feminism or post-modernism or a pre-determined set of writers,” she says. And thirty years later that got me to thinking that the literary camps that espouse a particular way of thinking or a specific concern seem to be less-entrenched now. There is still “turf” but it doesn’t need to be defended quite as vehemently as it once did. So, for example, “environmental poetry” has a particular focus, but at the same time almost every poet I know has, in one way or another written on the theme of environment. And that’s okay.

Among the highlights in this issue is a substantial group of poems (nineteen) from Marilyn Bowering’s long poem sequence about Marilyn Monroe, Anyone Can See I Love You, which has since been reincarnated as a stage play, a radio play, and, recently, as an opera. There is a story called “Secret War” by Greg Hollingshead that documents life as it gets worse and worse for one trailer-park resident. Also here is an early version of a Bill Gaston story, “The Bronze Miracle,” which was included years later in his Giller Prize-nominated collection, Mount Appetite. Rounding out the fiction is a quirky selection of “Four Bean Stories” by Diane Vreuls (which brings me unintentionally back to the summer picnic).

There are poems by Erin Mouré, A. F. Moritz, Ranier Maria Rilke, and Ann York. And finally, a story by Jill Swartz in which she manages to maintain the opening metaphor for the length of the story: “My heart is a puppy” it begins. 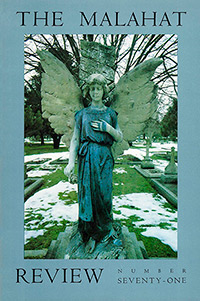