This issue of The Malahat Review begins with a calm, considered examination. Taken by Michael Ondaatje, the cover photograph of a man partially obscured by shadow presents us with a figure we can scrutinize, but who, by looking directly at us, almost into us, suggests that we are perhaps being read as well. The theme of looking within/being observed runs throughout this diverse, rich collection of work.

The issue is bookended by two fine stories: Joan Fern Shaw’s “Managing Just Fine” and William Bedford’s “The Piano Player,” both stories of quiet but significant realignment, private realizations that lead to subtle but important changes in the lives of the protagonists. A small moment of bravery for the snack bar waitress in Shaw’s story, and a largely innocent teenage escapade in Bedford’s, open up to reveal to the characters that things are not always how they seem. Cynthia Holz’s short story “The Whole Story” engages with the theme of self-creation through narrative— with a heartbreaking conclusion showing how the way we see others is often more about us and less about them, and can be profoundly influenced by our own changing perspective.

Perhaps the highlight of the issue is the interview with Leonard Cohen, who at that time had recently released both the album Various Positions and the poetry collection Book of Mercy. In conversation with Robert Sward and Pat Keeney-Smith, he reflects on how his process differed between the poetry collection and the album, and discusses topics ranging from European touring to the notion of encountering “angels” in day-to-day life, speaking also about his roots and early years in Montreal, particularly in relation to figures like Irving Layton and Louis Dudek. He calls Book of Mercy “a sacred kind of conversation…a little book of prayer that is only valuable to someone who needs it at the time,” inviting us to revisit—and perhaps rethink—this text.

The issue is rich in poetry, including work from Phyllis Webb, Fred Wah, Judith Skillman, and Roger Nash, whose “Please write to me in this poem” picks up the looking inward/outward theme: “I can hear the hazel green / of your eyes almost forming…Or are they still mine, / out looking for you?” Also noteworthy is an excerpt from Daphne Marlatt’s Ana Historic, which was newly completed at the time; Marlatt was appointed to the Order of Canada in 2006.

In the closing pages, Matt Cohen’s Nadine is (favourably) reviewed, as is Diana Hartog’s Candy from Strangers (which won the first ever Dorothy Livesay Poetry Prize in 1986). Less fortunate is Raymond Souster, who receives a short little dagger of a review from Stephen Scobie; It Takes All Kinds is severely dealt with in fewer than forty words. 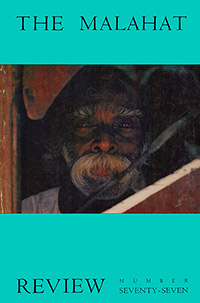