I came to this issue, billed as “A Special Issue on George Johnston,” knowing next to nothing about its subject. I can now quite honestly say that I’ve enjoyed the most splendid of introductions to this remarkable man. The fleshed-out biographical and bibliographical facts can be found on Wikipedia of course, but suffice it to say here that he was born in Hamilton, Ontario in 1913, was a long-time academic at Carleton University, was married to Jeanne McRae and raised six children, was an accomplished poet and translator, and retired in 1979 to a farm in southwestern Quebec. He died in 2004.

The contributors to this festschrift include fellow poets and colleagues, many, alas, also passed on, including P. K. Page (1916-2010), Earle Birney (1904-1995), Elizabeth Brewster (1922-2012), and Jay MacPherson (1931-2012). One only need read their tributes, in the form of poems, or notes of appreciation of his poetics, of his good and generous nature, of his gifts as a teacher and translator, to be assured that this was a man worth knowing.

Highlights within the issue are many. Johnston was a translator of medieval Scandinavian texts and sagas, primarily Norwegian and Icelandic. The issue opens, however, with his delightful translations of ten contemporary poems from the Norse by Knut Odegard, and five facsimiles of his own poems in his trademark calligraphic script. In “Three Talks with George Johnston,” William Blissett, then a University of Toronto professor and forty-year friend of Johnston’s, interviews him over the course of a visit, with “no tape recorder to turn everything to plastic.” Johnston’s answers to questions are woven within Blissett’s helpful framework of the course of Johnston’s life (including military duty, his first publications, and completing his master’s thesis—“The Influence of Blake on W. B. Yeats, with special reference to the structure of symbolism and the techniques of versification” —under the supervision of none other than Northrup Frye.

Apart from his obviously superior scholastic mind, teaching skills, and enviable grasp on the finer aspects of poetics, there emerges a portrait of Johnston as a hard working but playful husband, father, friend—and beekeeper—who cheerfully created imaginary beings and insisted his farmhouse contained a poltergeist.

The book review section in this Malahat contains one by Constance Rooke on The Progress of Love, by Alice Munro. It is a shame that Rooke did not live to see her prophecy come true: “…I think Munro has earned the Nobel Prize.” 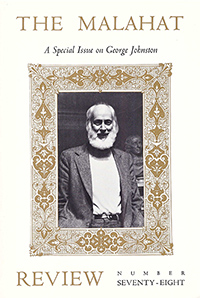