Featuring a whopping 24 contributors crammed into an impressive 172 pages, issue 79 opens with cover art by P. K. Page (painting as P. K. Irwin), plus nine poems by then-UVic Writing faculty member Derk Wynand, the short story “Little Seeds” by Michael Ondaatje—who had already won a pair of Governor General’s Awards by this time—as well as the story “Dressing Up for the Carnival” by Carol Shields. (While Shields had already published five novels by this point, it would still be another six years before The Stone Diaries earned her the Governor General’s Award and the Pulitzer Prize, as well as other notable awards).

Other highlights include the short story “Margarita” by Margaret Hollingsworth, the poem “Herb Schellenberg” by Steve Noyes, two poems by Al Purdy, four poems by Eavan Boland, four poems by Bronwen Wallace, and local writer Terence Young’s memorable “On This Plane My Wife and I Are Still Dancing.” 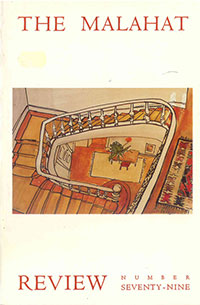