By the fall of 1987, we were eight years into Thatcherism, seven years into Reaganomics, and three years into the Mulroney years. “Devolution” transferred some powers to the provinces without transferring tax money. The Canada Council for the Arts suffered cutbacks and the CBC found itself under attack by the government. We in the arts thought it couldn’t get much worse.

We had no idea.

The Malahat Review, not only survived, but continued to produce issues full of high quality writing bound between elegant covers. The painting on the front of this issue is by a Toronto artist named Mieke Bevelander, and there is also an expensive eight-page, glossy insert of her drawings in the middle of the magazine.

Highlights of the issue include the opening story, “Bragg and Minna,” which would later appear in Timothy Findley’s fabulous collection of stories, Stones. In this piece, he take as a subject cancer, birth defects, homosexuality, and loss in his typically vivid and sometimes disturbing style. Another well-known storyteller—Thomas King—makes his first Malahat appearance in this issue with a story called “Not Counting the Indian, There Were Six,” which is also a tale told with a hint of the fabulous, but with a comic underpinning:

Granny preferred not to count the Indian, because Beth and Juan “Kid Savage” McTavish were married in Mexico. It was an Indian ceremony; Beth sent back pictures but there was no doubt in Granny’s mind about the legitimacy of a “pow-wow” as she called it.

All of the fiction in this issue is particularly strong; other stories include Kathleen Hill’s “Kimono,” Barbara Novak’s “Confetti Summer,” and an excerpt from Marion Quednau’s novel, The Butterfly Chair.

David McFadden’s 100 poem collection, Gypsy Guitar, was nominated for the Governor General’s Award in 1987 and seven excellent poems from that book are the first poetry offering in issue 80, followed immediately by Patrick Lane’s “Brothers” and “Dominion Day Dance” which later appeared in more than one anthology of Canadian poetry. Lorna Crozier has two poems in the issue, and so too do Diana Brebner, Robert Hilles, Angela Ball, and Sid Marty. Toward the back of the issue is a poem called “Stuttering” by Diane Raptosh, an American poet I don’t recall hearing from since, although Lord Google informs me she was named the first poet laureate of Boise, Idaho and her 2013 collection, American Amnesiac, was long listed for the National Book Award. The poem wisely informs us that: “only the full-lipped lover / perceives how to ‘um’ just so. So / we’re always on the brink / of some expression—talk often / takes lifetimes to do well.”

Notable in the book reviews section is a three and a half page review by Aritha Van Herk of Michael Ondaatje’s In the Skin of a Lion. “Yes. Yes. This is what language can do,” she says. 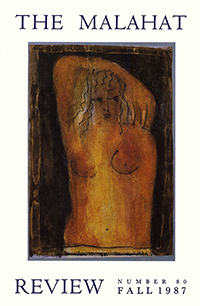