Print edition of Malahat Review Issue 81 (Winter 1987). This issue is not available for online purchase due to low stock. Please contact The Malahat Review at malahat@uvic.ca or 250-721-8524 for more information.

This poetry-rich issue opens with a moving last-minute addition from Phyllis Webb: “Gwen, I didn’t know it had been so bad, such a long / way down these past months….” Gwendolyn MacEwan had passed away just a few weeks earlier, and Webb’s raw response opens the issue. A sense of loss persists in many of the pieces here—in various ways, things are not quite right, and there’s often a sense of unease and darkness, sadness. Human beings suffer, and persevere, and suffer some more, trying to find out “How one part connects / with another / or fails to connect.” This comes from Derk Wynand, who has four poems in this issue; Wynand chaired the Department of Writing at UVic, and went on to become editor of The Malahat Review from 1992 to 1998.

Early in the issue we are also treated to five poems by Rosemary Sullivan, whose first poetry collection won the Gerald Lampert Award in the previous year, and who would go on, in another decade or so, to write a very well-received biography of Gwendolyn MacEwan (in addition to other significant biographical works). Sullivan’s poems here, from “A Chilean Sequence,” draw on her time spent in Chile, and blend the personal and the historical. A sense of danger hangs around these poems, but so does a corresponding sense of movement and risk: “the point of a wall / is to climb it; of a street, to take it. Of a town like this / to leave it.”

A wonderful antidote to the darkness in the issue is found in work by Fabio Morábito. “Tools & Co” offers a peek into his then-forthcoming Toolbox (originally published in Spanish; the translation here is by Geoff Hargreaves). Morábito considers the tools that we use in daily life—in this selection we are introduced to “String” and “Rags.” The pieces are utterly charming and seem almost brilliant in their re-imagining of objects so mundane that closer examination has until now probably seemed pointless to most of us. Not so for Morábito. A string is “a dot elongated to the point of obsession…but seen up close, its real nature becomes apparent…at every point along a string there is tangible evidence of its prostration.” Meanwhile, “A rag generalizes. There’s no subtlety about it.” These pieces are surprisingly captivating, and a highlight of the issue; they are truly unique.

Other notable inclusions are “Preacher’s Geese” by Holley Rubinsky (1943-2015), a story of great sadness and yearning, and two poems from Kerry Slavens, now possibly better known to locals as the editor-in-chief of two Victoria monthly magazines. Reviews include Stephen Scobie’s extensive look at five 1987 releases—all by Canadian authors, all inspired by or dealing closely with real-life events—and one of Richard Ford’s Rock Springs, which Michael Helm felt established the novelist as “an important and distinctive voice in American short fiction.” This is a lovely issue to dip in and out of, and one that rewards re-reading. 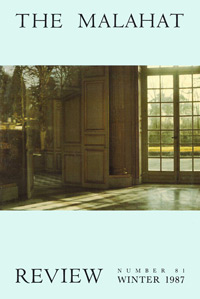