Print edition of Malahat Review Issue 82 (Spring 1988). This issue is not available for online purchase due to low stock. Please contact The Malahat Review at malahat@uvic.ca or 250-721-8524 for more information.

Having contributed several columns to Our Back Pages, reviewing issues from The Malahat’s previous editorial eras from long before I joined the staff in 2004, I find myself convinced there is no such thing as a “bad” Malahat Review. Not to say that every single poem or short story is necessarily my cup of tea, but that, without exception, one can pull down a random back issue and be largely amazed. Witness: Number 82, from the Spring of 1988.

The issue opens with “Flight,” a three-part story by Vancouver author and anthologist Keath Fraser. Two years before, Fraser’s short-fiction collection Foreign Affairs had been a Governor-General’s Award finalist and had won the Ethel Wilson Fiction Prize. “Flight” begins with a day-in-the-life account of an adult grandson who seems to lack any moral compass, moves to a monologue from “son,” (actually the grandson’s father), wherein his grandiose plans and dreams of greatness are revealed as dreams only. The third part of the story, “Father,” concerns the grandfather and is a tour de force of writing. The characters—the father, his wife, and their gondolier—are not the only ones swept away as their hot-air balloon adventure goes terribly awry. Suspenseful and thought-provoking…and that’s just the first story.

There is a small portfolio of eight black-and-white photographs by Sam Tata (1911 – 2005) a Shanghai-born photojournalist who immigrated to Canada in 1956. His subjects, authors and artists living in B.C. at that time, include Keath Fraser, Robert Kroetsch, Bill Reid, Marilyn Bowering, Roy Kiyooka, and Sinclair Ross. All photos were taken in their homes with available light, a technique Tata preferred.

The poetry in this issue is a particular delight. Three poems by Jan Zwicky; a seven-part poem “The Hips,” by bpNichol (who died just six months later), four poems each from Judith Rodriguez, Judith Pond, George Johnston, and David Manicom, as well as a stunning suite from the one and only John Newlove (1938-2003). Titled “In Progress,” the poet contemplates mortality with heartbreaking insights.

Returning to fiction, we find “One Good Story, That One” by Thomas King and “Three Stories,” by Joyce Carol Oates. Their very names and reputations should assure you that these are accomplished additions to the issue. Also of note are the many book reviews of recent releases of the time. Long-time contributor and Malahat poetry board member Jay Ruzesky looks at David McFadden’s seminal Gypsy Guitar; Mark Anthony Jarman contributes three short reviews, including one of Cynthia Flood’s The Animals in Their Element, and Michael Kenyon (another reviewer still writing for us) considers The Blackbird’s Song, by Pauline Holdstock. All in all, this is a splendid issue from beginning to end. 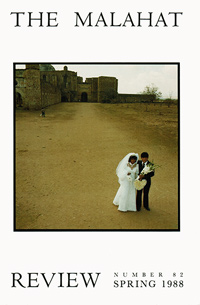