Print edition of Malahat Review Issue 7 (July 1968). This issue is not available for online purchase due to low stock. Please contact The Malahat Review at malahat@uvic.ca or 250-721-8524 for more information.

Jean Cocteau’s 1959 pen-and-ink self-portrait graces the cover of this issue, a hint of content to follow.  Sure enough, William Fifield starts us off with “Excerpts from Conversations with Jean Cocteau.” This piece allows a glimpse into the French writer’s life, opinions, and what he had to say about some of his contemporaries, including Marcel Proust, Ernest Hemingway, Picasso, and Tennessee Williams.  This interview was conducted a year before Cocteau’s death in 1964.  Another illustrious author is considered in Jane Hedley’s “Imprisoning and Expressing Him: The Dramatic Monologues of F.T. Prince.”  Prince was a British writer most often discussed in conjunction with his poem “Soldiers Bathing.”  The thoughts on these well-known writers and artists lend an informative sense of historical perspective.

Issue #7 juxtaposes studies of established writers with the works of writers who have become well-known since. Canadian writer Susan Musgrave makes her second appearance in The Malahat with three short, pensive poems.  American writer, James Dickey, shares his worksheets, which culminate in the poem “The Flash.”  Paul Theroux and James Welch are two other American writers whose early poetry appears in this issue.

Also of note is Robin Skelton’s short introduction to the works of Jack Coughlin, an American artist, which is followed by twelve stunning black and white plates of Coughlin’s works. 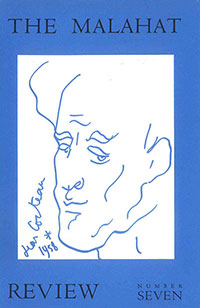