Print edition of Malahat Review Issue 8 (October 1968). This issue is SOLD OUT.

The Malahat’s issue number 8 is most notable for its provocative cover art: a painting by Mel Ramos, Walrus, photographed by Ron Chamberlain. This portrait of a nude woman sitting atop a walrus would be shocking even today as a cover of a literary magazine. The centerfold features eight more of Ramos’ drawings, as well as commentary from Robin Skelton, “The Art of Mel Ramos,” which delves into the effect and idea behind his “pop art.” This is not to mention this issue’s array of award-winning poets: Miriam Waddington, John Robert Colombo, Stanley Cooperman, Gwladys Downes (then professor of French at UVic), and J. Michael Yates are notable names who all contribute to a section called “Seven Poets of Canada.” This portion showcases eleven works by these celebrated poets. Issue 8 also offers an American counterpart: “Seven Poets of the U.S.A.,” as well as various pieces of fiction and nonfiction. John Peter reviews George Cuomo’s novel, Among Thieves, as well as listing a number of titles “Received and Strongly Recommended” in the back of this issue. Works from that year that stand out include The Dainty Monsters by Michael Ondaatje as well as Leonard Cohen’s Selected Poems, and John Updike’s novel Couples. 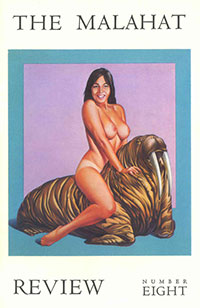