Boy, it’s tough to pick up any past issue of The Malahat Review without finding at least one name in it that makes you perk up and say, “Really?” This time, it’s future Life of Pi author Yann Martel’s turn with the short story “Mister Ali and the Barrelmaker.” His first novel was still five years off at this point—with Pi 13 years away—but his author bio here is charming in its simplicity: “Yann Martel works as a security guard at the Canadian Embassy in Paris. He recently completed a novel called “O x b = 70 or Love in the Cluttered World.” (Uh, yeah. Don’t hold your breath for the 3-D movie version of that one.)

Also well worth noting in this issue is the compelling story “A Hunter’s Moon” by Audrey Thomas, Erín Moure’s poem series “The Rainshore,” three poems by Brian Bartlett, one long poem by veteran West Coast poet of the people Tom Wayman, and the short story “Rapid Transits” by Holley Rubinksy—which would win National Magazine Award gold in fiction and, shortly after this, earn Rubinsky the very first $10,000 Journey Prize.

There’s also the rather odd cover photo by Rafael Goldchain (“Juchitan, Oaxaca, Mexico, 1986”), which, while over 25 years old now, would look utterly at home on the cover of any current issue of Geist. 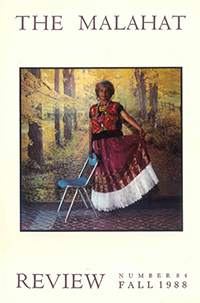