Issue 85 opens with a searing story from the late Holley Rubinsky (1943-2015). Here are the first two sentences, a classic storytelling approach with punch: “Ginger Dawn, who is nearing seven now and just full of it, is down the road picking on some chickens. I am on the veranda, reading an eviction letter written by some lawyers in Seattle, Washington.” And from there, I couldn’t stop reading Rubinsky’s “Grounding,” which explores the desperate weeks after the narrator’s elderly friend and caretaker has died and she is forced to confront the fact that she and her daughter may soon be homeless. Rubinsky, who died last August, was a respected fiction writer and mentor from the West Kootenays. In 1989 she was the first-ever recipient of The Journey Prize for her story “Rapid Transits,” which appeared in The Malahat Review. Her last collection of short fiction, South of Elfrida, appeared in 2013 from Brindle & Glass.

From Rubinsky, the issue moves into poetry, including work from Vancouver poet Rhea Tregebov, Saskatchewan-born poet Monty Reid, Okanagan Valley poet Nancy Holmes, and two contributions from American Angela Ball, whose work has been published in The New Yorker, Atlantic Monthly and The Best American Poetry. The second prize poem in the Malahat’s Long Poem Contest, Judith Pond’s “An Early Day,” appears in the last third of the issue. Six works by Governor General’s Award and Griffin Poetry Prize winner Roo Borson rounds out another strong issue for poetry. Tip of the hat goes to Alan R. Wilson’s “Thirteen Ways of Looking at Pepper,” which made me laugh out loud. Victoria-based novelist and short story writer Bill Stenson closes this issue with the story “Click: A girl with two pails,” that may document the first description of a selfie in fiction. I chuckled while reading editor Constance Rooke’s sharp contributions to Books in Review, including a rebuke of Jay McInerney’s Story of My Life: “a trendy, rather trashy novel,” that’s “not a bad book to take to bed with a box of chocolates, if you don’t mind feeling a little sick when they party’s over.” Amen. 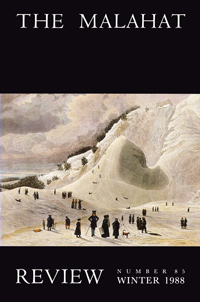