As always, Malahat features writers at different stages of their careers, and this issue is no exception, beginning with a genre-hopping photograph by Michael Ondaatje on the cover. Honours art student, Bonnie Curran, has four Scottish “sheep” photographs that lead us into Susan Glickman’s longish poem, “Henry Moore’s Sheep.” In fact, I would say this is very much a poetry issue including one of my personal favourites, Paulette Jiles (1984 Governor General’s Award, Celestial Navigation), and her “Song to the Rising Sun.” The poem draws from her ten years spent in the Arctic as a journalist, and is a meditation on waiting through the dark for the sun to return. Toward the end of the issue, there are six sections from Elizabeth Brewster’s (1922–2012) long poem, “Garden Cantos: A Month of Poems,” in which her prairie garden gives her cause to commune with Dante, Homer, and Pound. There are two poems from John Newlove (1938–2003) who also won the Governor General’s Award in 1972 for his collection, Lies. Victoria’s second poet laureate, Linda Rogers, has three poems from her Mile Zero series. And the final story in the issue is a beautiful poetic prose piece by Rudy Wiebe about a man’s loss of his daughter.

Loss is prominent throughout, beginning with David Manicom’s opening story, “Bid.” The structure is based on the sale of a family farm, but with the underlying loss of the farm wife’s chance to become a concert pianist. There is loss of innocence in Inge Moore’s three short, short stories; loss of a husband in Helen Frost’s poem, “Wandering around, getting nowhere,” and; loss of children to adulthood in Susan Lazarro’s two poems.

In the review section, Michael Kenyon’s enthusiasm for Susan Lowell’s story collection, Ganado Red (Milkweed Editions, 1988) stands out from the others. He begins with Phillip Lopate’s opening, “Eureka!,” from his introduction to the book, and Kenyon goes on to say he too felt like “cheering” when he reached the end. A quote from his review, for me, sums up all the work in this issue: “The stories are not strange, not strained, yet under the surfaces lie marvellous things…” 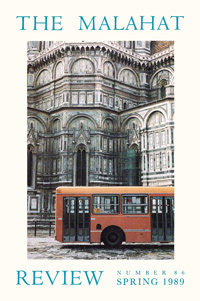