Phyllis Webb, a former Creative Writing professor at the University of Victoria, launches us into this issue with twelve short, sonically charged poems from her manuscript, “Hanging Fire.” In “My Father Took A Cake To France,” Cynthia Flood’s narrator moves from the present to the past and back again as she examines her father’s disdain for his own country. This story won The Journey Prize in 1990, and would later become the title of her second collection of short stories, published in 1992 by Talonbooks. Elisabeth Harvor, a Toronto writer, contributes two poems on mother-son relationships. These poems are included in her poetry collection, Fortress of Chairs, which won the Gerald Lampert Memorial Award in 1992. She was also the recipient of the Malahat Review’s Long Poem Prize in 1990, and the Malahat Novella Prize in 2004. Scotiabank Giller Prize winner Elizabeth Hay, a novelist and former CBC radio broadcaster, uses the fable as storytelling method to show the fine line between hot and cold in “The Snow Was Burning.” Senses abound in John Pass’ contribution of three poems, part of a four-volume linked quartet entitled “At Large.” 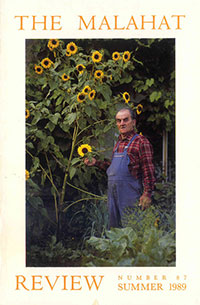