Many of the short stories in this issue are concerned with isolation, love, and loss. They are voice-driven pieces with quirky characters. The opening story will later become the title of Greg Hollingshead’s 1992 collection. White Buick twines a narrative out of a childless marriage, a tenant who is largely referred to as “the whore,” and a Buick that can miraculously heal itself. It’s a moving story about immigration, told in short passages, each vignette a further insight into a couple’s strained relationship, spiralling towards its central premise: What can you believe when nothing is familiar?

Caroline Woodward’s “Farm Stuff” is a short riveting story about rural poverty. It begins and ends with underwear hanging on a clothesline. Beautifully executed, the narrator’s situation is revealed as an out-of-town woman shows up asking to use the toilet, which turns out to be an outhouse that “really stinks in the summer no matter how much wood ash gets dumped down the holes.” Susan Mayse’s “Flat Black” is a stream-of-consciousness piece with a singsong story-telling voice that recounts the story of a vehicle accident, a prized pig and the narrator’s sister’s death. Debbie Howlette will later gather “Vermont” in her debut collection, a set of linked stories, called We Could Stay Here All Night. “Vermont” also has a hog in it, albeit incidentally. Elaine Auerbach’s “Missing Persons,” told in a distant third person, spins an enchanting story of desire and logic. Joan Fern Shaw’s “The Heifer”is about the death of a sibling and mother and a chance accident with a calf on a deserted back road.

The winners of the 1989 long-poem prize appear in this issue: Angela Ball, Mary Di Michele, and Douglas Burnet Smith. All three will go on to re-publish their prize winners poems elsewhere. Mary di Michele’s, “Luminous Emergencies” will be the title poem of her sixth collection and “The Knife Thrower’s Partner” will become Douglas Burnet Smith’s next book, also a sixth. Ploughshares will later reprint Angela Ball’s “Four Poems for Anton Chekhov” in its issue 51.

“The Back Kitchen” one of four poems by Jan Zwicky, will reappear in her third collection, The New Room. The five poems by Marin Sorescu, translated from Romanian by Stuart Friebert and Adriana Varga with Gabriela Dragnea, are varied but have a consistent deconstructive quality, as if the poet is breaking his subjects into parts to lay bare the truth of what they are. The issue also features four poems by David McFadden and four by John Steffler. “Damsels in Distress,” one of the McFadden’s poems, will later be reconstructed into another poem, “Moonkat,” collected in Anonymity Suite, his eighteenth book.

This is a lovely issue from beginning to end. 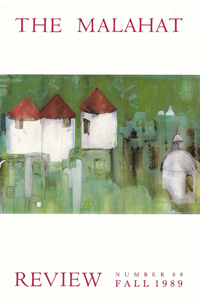