Hands up: how many of you have heard of Trevor Ferguson? He may well be Canada’s Cormac McCarthy. I make the comparison because McCarthy published his first novel in 1965 and from that beginning on, his work was seen by critics as something special. But it didn’t sell for decades. Ferguson published his first book in 1977 and has also since been lauded as a master of literary fiction. But he hasn’t won the prizes and isn’t a household name. All you have to do to understand why his lack of notoriety is a CanLit wrong that ought to be righted, is to read the first offering in this issue of Malahat. “Floating Hearts” is from his novel The True Life Adventures of Sparrow Drinkwater and it is a virtuoso story which details the genesis of Sparrow himself. The story will make you want to hunt down and read the rest of the novel as soon as you can (you can borrow my copy if you promise to give it back).

All of the fiction is particularly strong. The other bookend to the issue is Diane Schoemperlen’s “Stranger than Fiction,” which is, as the title suggests, a wonderfully self-conscious piece of writing. Thomas King’s “The Dog I Wish I Had, I Would Call It Helen” will make all parents squirm, and stories by Meeka Walsh and Terry Griggs are deftly executed.

There is a quirky section of angel poems in the issue, grouped together, I believe, just because we happened to accept a number of angel-oriented poems within a few months. They include John Donlan’s “Messenger” and a longish poem by Nabaneeta Dev Sen called “Welcome Angel.” Other poets represented here include Elisabeth Harvor, Elizabeth Philips, and Mia Anderson.

Necessary Angel, a Toronto theatre company, mounted a production of Michael Ondaatje’s Coming Through Slaughter at the Silver Dollar on Spadina for a month in June and July in the summer of 1989. With a portfolio insert of photos from the show by Rafael Goldchain, Malahat invites us to imagine being some of the fortunate attendees of that run. As far as I know (and as far as my Google skills can take me) the play has not been mounted since (although there is, apparently, a film of Slaughter currently in the works). 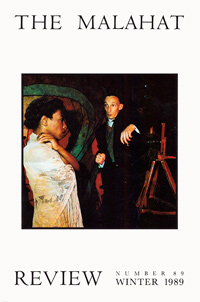