In Issue 90 the reader enters Malahat’s literary time machine back to the year 1990. A relationship to nature and a concern for environmental destruction is prominent, making for a relevant read twenty-six years later, and a fitting read to take outside to the beach or backyard.

Rhea Tregebov’s poem “Sleep” expresses awe at the miracle of the earth’s endurance despite immense human injury: “Yet every May, the same insistent miracle. / The earth like a tatty old cat cleaning itself.”  “Here on the Coast” is a haunting poem capturing the soul of the west coast: “Then the trees call: / from their bases, / fluted mouths to the ground, / they are taking up / into the sky / their entangling love / of the air.”

A highlight within this issue, for me, is a trio of poems by Tim Lilburn: “Just This,” “The Cow Comes in Heat,” and “Post Holing.” Lilburn’s poetic devotion to ecology, philosophy, and musicality create a stunning symphony of sound and place.  “The world cannot take anymore,” he writes in “Post Holing,” a eulogy for the devastation of the earth. Anne Simpson’s poem “Lay Your Head on the Shoulder of Water and the Skin of Air” takes a more sensual address to the earth: “So you grasp and suck, / swallowing the thousand stars / the gulp of moon and the whole sweet sky.” There is a wealth of poetry in this issue, including work from Kim Maltman, Anne Simpson, Sharon McCartney, and Brian Bartlett.

Jane Urquhart’s “Changing Heaven,” an excerpt from her novel of the same name that would be released that year, is an otherworldly love story and mythical creation story all in one. It contains literary allusions to the Bronte sisters, along with a man named Jack who creates forests, and transforms into the wind. “It was said of him, he said of himself, that he knew one thousand five hundred different shades of green.” The short story “Wishbone” by April Bulmer features monologue-style paragraphs. “Wishbone” contains my most cherished line of Issue 90: “It wasn’t the toss of limbs she desired. It was the release of the cry women carry inside them like babies, a cry so tight it’s like a fist to the gut.” 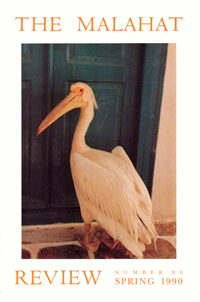