This issue begins with “Flight,” a not-so-short story by Holley Rubinsky (d. 2015). At thirty-five pages long, this is a bold choice; the story makes up nearly a third of the issue’s length. At the time, Rubinsky had recently won the first ever Journey Prize, and her short story collection Rapid Transits and Other Stories was a few months away from publication. “Flight” is a tightly controlled, powerful piece, and despite its length it would be difficult to suggest any areas where cutting wouldn’t damage the story. We accompany the protagonist, owner of a local hardware store, mother of a passionate, stubborn teenager, prey of a calculating young man, daughter of a man who has now “slimed off” after doing her terrible wrong, as she works through the effects of earlier trauma. Her daughter’s boyfriend’s father inadvertently sets off a chain of events that sends her “on a roller-coaster moving backwards through time,” travelling physically and psychologically as she wonders whether “there ever was an end to parents doing wrong by their children.” The story ends with the hope suggested by new life, but the leaden sense of patterns laid down in childhood, and cycles that are simply too hard to break, remains as we move into the rest of the issue.

Poetry comes next, including Roo Borson’s lovely “Starting the Tape” (one of six of her poems in this issue) and two poems by Toni Sammons that encourage slowing down and reflection on their phrasing and imagery: “soft edges interfere with organization / hard edges interfere with observation.” Mavor Moore (d. 2006) contributes two pieces, and selections from Libby Scheier’s (d. 2000) Sky: a poem in four pieces, which was also published in 1990, appear here. The issue closes with Patrick Kavanagh’s atmospheric piece “Incense,” excerpted from his first novel Gaff Topsails, though this book was not to be completed until 1995.

Notable in the reviews section are two reviews of Thomson Highway’s plays – one of The Rez Sisters and another of Dry Lips Oughta Move to Kapuskasing. These two plays, which Highway would later go on to translate and stage in Cree versions in 2010, are perhaps his best-known work. He won Dora Mavor Moore awards for each of them, marking a subtle connection to one of the poets named above – Mavor Moore, son of Dora, the Canadian theatre pioneer. Poetry by Al Purdy (d. 2000) and Marlene Cookshaw, assistant editor of this issue, is also reviewed here, as is Jane Urquhart’s second novel Changing Heaven, which is called “a profound pleasure.” 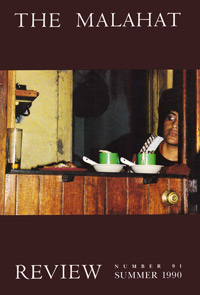