Long before famed Canadian writer Yann Martel saw his novel Life of Pi translated to the big screen, he was submitting stories to The Malahat Review. And long before his novel won the prestigious Man Booker Prize in 2002, his short story entitled, “The Facts Behind the Helsinki Roccamatios,” which appears in this issue of The Malahat Review, won the Journey Prize in 1991. Canadian maritimer Rai Berzins’s story “Common Sense” was also nominated for the Journey Prize in the same year as Martel. Robyn Sarah’s poem, “The Touchstone,” laments the difficulties of change. John Donlan, a poet who hails from Ontario, makes his mark with three poems. The late Timothy Findley describes a memorial service for Gwendolyn MacEwen in an excerpt from his memoir, Inside Memory: Pages from a Writer’s Handbook. Findley was a recipient of the Governor General’s Award for English-language fiction for his 1977 novel, The Wars. Don McKay has seven poems in this issue, all of which won Gold in the National Magazine Awards’ poetry category in 1990. Many of these same poems were also included in his anthology, Night Field, which won the Governor General’s Award for Poetry in 1991. 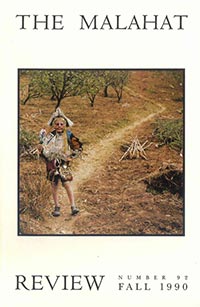