This issue is bookended by fiction, beginning with Eliza Clark’s “Acceptable Door Prizes” – an excerpt from her then-unpublished novel Miss You Like Crazy – and ending with U.S. author Margaret Barrett’s short story “In the Presence of an Ideal.” Both of these pieces are narrated by women and depict complex internal struggle. “Acceptable Door Prizes” follows protagonist Maylou as she meets a stranger (who isn’t really a stranger after all) and the two of them process their grief over each having recently lost someone close to them. Clark illustrates the mourning process beautifully by explaining how the loss of a loved one affects self-identity: “…the only way to find yourself as somebody separate is to be in love. Then when you are alone, you know it…They were part of what makes us, and now they’re gone, we’re not sure if the leftovers are going to be enough to motor on.”

Featured in this issue are the winners of the 1990 Long Poem Prize, beginning with Stephen Torre’s “Man Living on a Side Creek.” This six-page poem uses stark language and farm imagery to explore the pressures and pains of masculinity, ending with the powerful lines “sometimes it is harder / to reach for another man’s hand / than to bleed an animal.” The other winners are Elisabeth Harvor, whose “Afterbirth” explores childhood trauma while also depicting the beauty and nostalgia of growing up, and Marjorie Stelmach, who investigates visual art and realism in “Durer for Children.”

In addition to contributing a poem to this issue, Richard Lemm writes a review of Lee Gowan’s novel Going to Cuba. Other notable reviews include Mike Matthews’s appraisal of Alice Munro’s Friend of My Youth, and Sky Lee’s debut novel Disappearing Moon Café, which is lauded by reviewer (and then-editor of The Malahat Review) Constance Rooke (d. 2008) for its “sensational, riveting plot” and  “startling mix of obscenity and formal deference.” 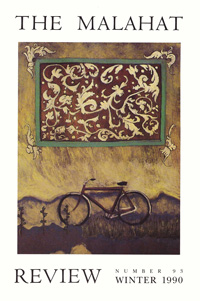