One of the things I liked best about being an intern at Malahat in the 1980s was that we didn’t have email. Contributors had to send us their work on disks, or else minions like me had to transcribe the story or poem into our computer from the original hard copy (I know, right?). But it turns out that typing out the poems of others is an excellent exercise for a young wannabe. In the process, the scribe becomes the poet, breaking lines in the same place and making identical word choices. To produce a good forgery of a Picasso, one must necessarily understand Picasso.

I bring this up because in the centre of this issue is a long poem by a young Anne Michaels called “A Lesson from the Earth,” which is written in the voice of Johannes Kepler the 17th-century mathematician. It’s a deep meditation about planets, life, the universe, and I remember spending a long afternoon typing it out just to try to get a little deeper into Anne Michaels’ mind, and feeling that fabulous tingle poets can feel now and then when they know they’ve stuck the ending like a gymnast: “What I learned then sustains me / through every sorrow: / it’s the believer who keeps looking for proof.”

This issue is important to me in a number of other ways as well, not the least of which is that the cover sports a photograph that I took in Trounce Alley in Victoria. After the issue came out, a gallery in Vancouver called to ask if they could represent me. They thought I was a high-realist painter and that was the end of that career.

John Lent, my long time mentor, has a poem in this issue called, “l’oeil de dieu au Quai de la bruche” which is a meditative love poem from his Strasbourg period. A few pages earlier, you’ll find eight poems by Patricia Young, some of which I continue to use in poetry classes including “Three Point Five Nine” and one of my favourite relationship poems ever: “Saturday Night Dance at the Boy Scout Hall.” One of the pleasures of editing a literary magazine is arranging material within a particular issue—creating interesting juxtapositions and connections, so “Saturday Night Dance at the Boy Scout Hall” is followed immediately by a short story by Monique Proulx (translated by Naomi Guttman) titled “Saturday Night” which looks at relationships in rather a different, darker way. Some readers may be interested in the story because it is written using the second person point of view.

Rounding out the poetry in the issue is a group of prose poems by Diana Hartog and also a sequence called “The Body of My Garden” by Nancy Holmes, whose later environmental attentions are already in evidence here.

The first story in the issue, “Emma’s Hands” by Mary Swan, is an aching exploration on the death of a child and Janet Berkok Shami’s “Blind Journeys” is also an elegy about loss. It is a powerful story and her writing reminded me in places of the style of Rohinton Mistry. It’s a bit of a gem given Shami’s limited production over the years and we’re lucky to have it here. 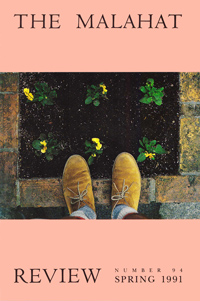