Issue ninety-six opens with an excerpt from Louise Young’s play “Hungry Ghosts”, which won the CBC Playwriting Competition in 1989. Young completed two BFAs at the University of Victoria (in creative writing and painting) and the influence of painting comes through in “Hungry Ghosts,” which can be described as ethereal, surreal, and dizzying: “I’m in a room filled with oppressive flowers and satin and Samuel’s waxen body sleeps before me.” Images appear like brushstrokes: “…small yellow leaves catch in the blue sky like a dress caught in the barb of a fence.”

The issue is brimming with a diversity of poetry, beginning with Brian Bartlett’s 1991 Malahat Long Poem Prize winner “Underwater Carpentry,” an eleven-page, five-part poem, later printed as a chapbook by Goose Lane Editions. “Underwater Carpentry” has currents of “Howl” moving through it as Bartlett experiments with emotion, humour, history, and the reader’s expectation. In the first half, the sense of place has a psychedelic ambience to it: “Leftover pale light gets soaked up / from between buildings, the sponge / of night at work.” The second half surprises, as it morphs into a fiction-like format.

Following Bartlett is the co-winner of the 1991 Malahat Long Poem Prize, Janice Kulyk Keefer’s “Isle of Demons,” a series of twelve extraordinary poems based on an account of a young French noblewoman banished to a small island with her forbidden lieutenant lover and a servant. Kulyk Keefer has twice been nominated for the Governor General’s Award. “Isle of Demons” reads as a lament, and the voice whispers off the page: “Seal me with your white silence, / like the powdered roots / in the apothecary’s jars; / the pale, cut tongues / of linden flowers.”

A trio of poems by Governor General’s Award-nominated poet Richard Harrison explores a variety of relationships. “But all love is divisible, war is the proof….” Harrison says in “Soldiers sleeping in one another’s arms,” a poem in which the narrator tenderly imagines his father as a young soldier in war. “Batman” by Harrison creates a stark image of the hero, and reads like a poem version of a comic strip: “He says only enough to fill a word balloon.”

Poet Dorothy Brown (Howe) explores the absence of the father in her child’s life in the poem “A Gathering of Men – for Robert Bly.” “At first / his absence was a hole / in your chest.” Elisabeth Harvor’s poem “How Long Will it Last” explores infertility: “you stroked my hair for what seemed like hours / I could feel the father already in it.” Margaret Almon, a poet as well as a mosaic artist, explores lust in her wonderfully titled poem “Love at the Five and Dime— for Nanci Griffith.” April Bulmer holds a BA in English and Mass Communications, and an impressive total of three Masters Degrees: Creative Writing, Theology, and Religious Studies; her diverse education comes through in her three poems. There is something sacred and mystical feeling about Bulmer’s poetry, which in one poem describes the angels feathered arms rising “like prayers through the stained ceiling.”

Closing issue ninety-six is a little story by Bruce Grierson titled “Sympathy,” and a longer piece of fiction titled “Missing you,” written by Athena George, who studied writing at the David Thompson University Centre in Nelson, B.C. Grierson’s “Sympathy” has the narrator dangerously experiment with what it would feel like to be blind like his brother: “I shut off the headlights and drive, squeezing the wheel fast in the dark cab, counting the seconds, seeing how long I can hold out.” I found myself totally absorbed in George’s “Missing You”, a story drenched in quiet pathos as a woman develops a friendship with a stray cat and her litter: “Your fur…is taffy, apricots, lilies, with streaks of ivory, buttermilk, pearls. All of those things, cat, and none of them”

The reviews section includes notable praises of Rita Donovan’s first book of fiction, Dark Jewels, a “dazzled” Jay Ruzesky’s review of Anne Michaels book of poetry, Miner’s Pond, as well as reviews of Patricia Young’s Those Were the Mermaid Days, and Issue 1 of Gatherings: The En ‘owkin Journal of First North American Peoples. 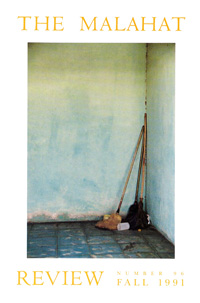