Our spring issue showcases the 2020 Open Season Award winners: Joshua Whitehead’s “Who Names the Rez Dog Rez?” (cnf), Patrick Grace’s “A Violence” (poetry), and Ajith Thangavelautham’s “Moonbird” (fiction). Manahil Bandukwala curves “fingers around / pencils / paintbrushes / charcoal sticks” in “To ride an art horse.” Ayaz Pirani is “faced with a thousand / dogs off-leash” in “Sat Panth.” Christine Wu celebrates the new year in “Ginger Scallion Fish.” “They go like rabbits,” begins Rob Taylor’s “Poems;” Edward Carson states “[n]ot buoyant our language travels” in an excerpt “from Whereabouts;” and Matthew Gwathmey documents “A High Frequency Words List.” “One midnight call is all it takes | to exercise power” in Tania De Rozario’s “Due to Unforeseen Circumstances | This Film Will No Longer Be Screened.” “If I was a mall,” muses Hollie Adams in “Nice Girl,” as Emi Kodama ventures into “A forest of houses, a corridor of trees.” A riot breaks out in Bradley Peters’ “Forgive Me,” while “the police blockaded / Brexit protests” in Kevin Shaw’s “Red Fox at Blackfriars Bridge.” Teenagers suffer through the summer heat in Emma Wunsch’s “Notes on (Day) Camp: 1986,” and Glen Downie revisits his childhood in “Nothing Happened.” Stephanie Harrington cheers her brother on in the ring in her memoir, “Fighter.” Rachel Jansen’s “Beth” is a mother of two who goes through a coming-of-age story a little later in life, meanwhile Judy LeBlanc urges her mother to rise in “Rose.” Two lovers meet in Joseph Dandurand’s “Meant to overtake.” Melissa Spohr Weiss explains that “Gift in German Means Poison.” Yi Zhe translates the work of poets Zhu Jian and Zuo You.

See all the contributors, read book reviews, and check out interviews on the Issue #210 Table of Contents page.

Please be aware that our digital edition is now offered only in a non-printing PDF format. 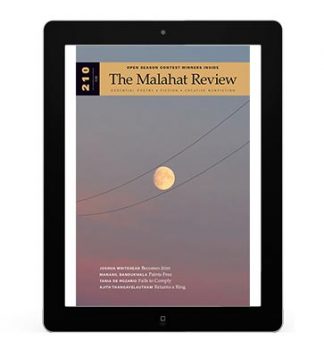