“These are family secrets you need to know about, in order that your descendents realize whereof they spring and the whyfors of their existence on earth” — so speaks Mother of Leon Rooke’s short story, “Old Mother” which is told in his Rookishly fabulous, southern gothic sort of way. The story is a delight in an issue full of delightful things.

Number 109 opens with a story called “Boy” by Elise Levine. If you look her up on Google, you will see that she is doing just fine as a writer, publishing with Penguin and so on, and when you read the story, you will wonder why she isn’t a CanLit household name. The story is brilliant. Levine’s language is utterly engaging and “Boy” builds with dramatic tension that is released like a catapult at the story’s end.

There is some very fine poetry in this issue, including Elizabeth Harvor’s “Childhood Summer Night” in which you will find this image: “she turns to // laugh and the light scatters / and so we stay where we are.” 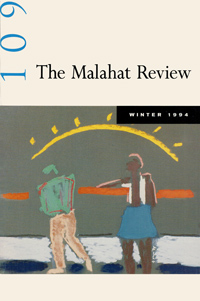