This is an issue neatly divided into two parts. The first half of the journal is devoted to the winning entry in the first-ever Malahat Novella Prize. This prize still runs, alternating years with the Long Poem Prize. The 1995 winning piece is an accomplished, assured work of fiction from Sorayya Khan that unfolds in a tightly controlled and deeply emotional way.

“In the Shadows of the Margalla Hills” weaves together two storylines connected by loss. Anne Simon lives in Islamabad, where her husband has accepted a work posting. She inhabits the detached world of a certain type of expat, in a “house that came with several servants” and initially spending “afternoons reclined on a chaise next to the swimming pool.” Sadiq, a man from Lahore employed as a servant in Islamabad, welcomes his young son for a visit. The two storylines collide when Anne does irreparable damage to Sadiq’s life, in a catastrophic event that both extinguishes and creates life, and which casts a shadow over the rest of the story. Khan’s writing maintains suspense while being lush and seductive and the interwoven storylines are gripping. The writing is evidently material that Khan worked over at length; the biographical info in this issue notes that the novella contains writing from a novel in progress, Five Queen’s Road (2005), while current information on Khan traces the Novella Prize-winning entry as finding its way into what became Khan’s novel City of Spies, published in 2015.

The second half of the issue contains exclusively poetry, including a piece from Lorna Crozier, then teaching at UVic, now Professor Emeritus. Patrick Friesen, now teaching at UVic, also has two poems included in this issue, as does Stephanie Bolster, who would go on to win the Malahat Long Poem Prize in 1997. There is really a wealth of work by Canadian poets in this issue: in addition to the above, we have two poems by Sina Queyras, then finishing her M.A. at Concordia, and now teaching there. There is also work by Brian Wickers and five poems from Don McKay, who had won his first Governor General’s award four years earlier and who would win his second five years later, in 2000.

There is an extensive reviews section, including P. K. Page writing on Idries Shah’s The Commanding Self, and Carol Matthews (recently awarded the Order of British Columbia) considering four books by the wonderful Natalia Ginzburg. 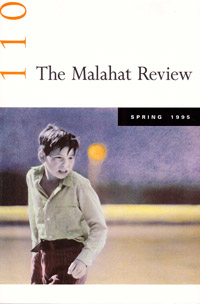