This excellent issue (but then, aren’t they all?) features the co-winners of the Long Poem Prize, Halifax-based Brian Bartlett, who also won in 1991, and Stephanie Bolster, originally from the west coast, but based in Ottawa at that time. Bartlett’s seventeen-page poem, composed in quintets, opens the issue. “Hawthornden Improvisations” was drafted during his month-long stay at Hawthornden Castle International Retreat for Writers, in Scotland. The author’s approach is a purposefully improvisational one, with thoughts ranging widely, yet always circling inward and with revelatory insights. He muses on the picturesque surroundings, contemplates his past, and often pokes fun at his own seriousness and tendency to dwell on the shadows. “—why do I turn / to the boxed chick, the caged dog. / a hedgehog flattened like a spiny Frisbee, / its guts gone? I’m handed all this freedom like a feast // but shove the platter aside to study bread and water.”

According to the contributor notes, Bolster, who won the Bronwen Wallace Award for Poetry in 1996, wrote “Deux personnages dans la nuit” after a move from Vancouver to Quebec City in 1995. This ekphrastic work is a series of poems in response to paintings by Quebec artist Jean Paul Lemieux (1904 – 1990). These are quiet poems, meditative, reflective. The author seems to both lose herself and find herself in the paintings, their subject matter mirroring situations in her own life. “…A woman // I should know is placed just so, as all / your women are, elegant and self- // contained, extending in her hand / wildflowers a blue I thought extinct.” (“Le Champ de Trèfles”)

There are many other fine poets in this issue, including Robin Sarah, Iain Higgins, Suzanne Kort, and Christopher Patton, whose “Sestina” is one of the most accomplished I’ve read.

In fiction, we have Sandra Sabatini’s “The Light That Fell Behind Him,” wherein a daughter, a pediatrician, is about to undergo sterilization rather than bear a child that might develop the Alzheimer’s disease that runs in her family. A difficult topic is given respectful due in this moving story. Leon Rooke’s “”Sidebar to the Judiciary Proceedings, the Nurnberg War Trials, November 1945” imagines the visit of a government-sponsored “craniologist” to the home of philosopher Martin Heidegger and his wife Elfriede in order to measure Heidegger’s brain. The very premise of the tale leads to delightful and witty exchanges between the characters in a story only the large mind of Leon Rooke could have imagined—and executed—so vividly. 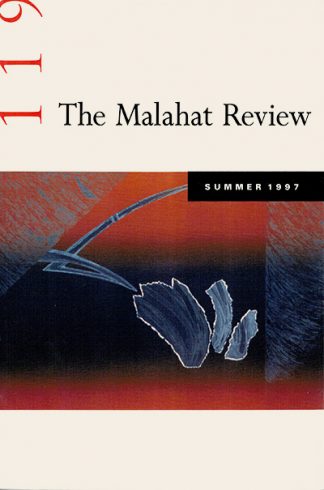