This issue begins with a dedication to the memory of Robin Skelton, the founder of  the University of Victoria’s Creative Writing Department, and a co-founder of The Malahat Review. Skelton died in August 1997, shortly before the publication of this issue.

The first piece is a non-fiction prose essay by Don McKay, a short one-page reflection on what it means to write and read poetry. Titled “A Word in Your Ear,” the piece attempts to respond to the question “does poetry have an audience?” McKay’s essay is an appropriate one for this issue, which contains a lot of high-calibre poetry.

“Bow Tie,” by Eric Miller is a short humorous portrait of a character who works as an usher in a movie theatre. He becomes the butt of some biting comments made by the narrator that may also be read as self-criticism by the poet. Miller is a long-serving member of the poetry board of The Malahat Review.

The collective Pain Not Bread (made up of Roo Borson, Andy Patton, and Kim Maltman) is represented here with five poems. These are from the then in-progress manuscript of Pain Not Bread’s book Introduction to the Introduction to Wang Wei (Brick Books, 2000) and are image-laden poems reminiscent of Pound’s translations in Cathay.

M. A. C. Farrant also contributes a funny prose poem to this issue, in which the speaker meets Leonard Cohen: “I’m very fond of beans, Leonard Cohen said, looking searchingly into my eyes—lingering he was in my eyes—we were having what you might call a moment of hesitation across a sea of beans.” 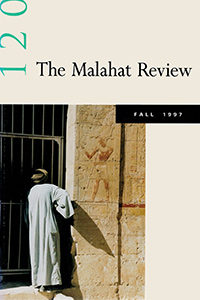