Each piece in issue 121 includes moving thematic and formal elements that pull the reader in, which creates a reading experience like no other. Not surprisingly, this issue is full of award-winning authors, including Don Coles who won a Silver National Magazine Award for his poem, “The Islands of Art”; John Burnside, a recipient of the Geoffrey Faber Memorial Prize; and Russell Smith, whose novel, How Insensitive, was a finalist for the 1994 Governor General’s Literary Award. Don Coles’ and John Burnside’s poems are compelling, which can also be said about Russell Smith’s short story, “Chez Giovanni,” about a restaurant called Giovanni’s.

Natasha Waxman’s “Singin’ Joy To The World” opens this fantastic issue with an emotionally searing depiction of a fraught relationship. William Lynch’s short story, “No,” also explores a similar thematic element. Sean Johnston makes his fictional debut with two short pieces: the first, “The Sorts of Things a Man Should Know,” provides an intimate portrait of a son grieving his father, and the second, “There Is a Way to Do This,” depicts the beginning of a new relationship. The speaker in Anita Willis’ poem “Speaking in Tongues” marks a point of contentment with another. Also well worth noting in this issue is the dynamic poem “She Did Some Laundry” by Maxianne Berger, whose work has appeared in multiple North American outlets, a short story by Will Goede entitled “Sleeping Arrangements,” and two poems by Stephen Frech. 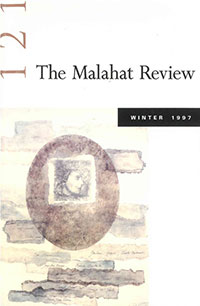