Print edition of Malahat Review Issue 122 (Spring 1998). This issue is SOLD OUT.

This scarce issue contains a remarkable gathering of poetry. A quick glance at the table of contents reveals many familiar names. Malahat’s current editor, John Barton, who was, back then, co-editor of Arc, has two poems here; Susan Glickman also contributes two poems. David Zieroth’s four poems are perfect examples of his brand of close observation in a deceptively simple, yet dream-like, narrative style. A man looking down at a speed bump from his window is suddenly in the frame, but back in time “to when and where I leapt / from the car, to find Father in the yard, / Mother in her garden, / light fixed on them as if they knew / they’d changed and I could see them / only in relief against the place I knew best…” (“The Speed Bump”). Jan Conn and Anne Compton have a poem each, and Jan Zwicky contributes four, three of which contain the word “song” in their titles. Her collection Songs for Relinquishing the Earth would win the 1999 Governor General’s Award and this poet/philosopher/musician’s engagement with lyric would also result in the 2005 publication of Thirty-seven Small Songs & Thirteen Silences, from Gaspereau Press.

For me, however, the highlight of this issue is the translation (from Spanish) by Victoria’s Geoff Hargreaves, of two short stories by Mexican authors. Fabio Morábito’s “The Tourist” follows the travails of the Count as he is waylaid in a small European village while en route to Paris. His hosts are adamant that the Count, who is suffering from “twinges in his liver,” remain until he recovers, but also insist that he visit some of the areas more noteworthy attractions, including Frick’s Fly, a domesticated housefly, The Battered Edge of Mrs. Riatzy’s Sink, and the Worm-Eaten Trim on the Back Cover of Mr.Tusnesdor’s Bible. Curiously, the Count begins to see the significance of all of these wondrous things. The second story, “Each to His Own,” by Jaime Moreno Villarreal, also has a traveller who feels out of his element in a foreign place—this time a hapless translator gets swept up in a shady gemstone deal in London.

There is also fiction from Barbara Lambert, who won Malahat’s 1996 Novella Prize. “Where the Bodies Are Kept” is set in Vancouver and is, essentially, a story within a story, with a touch of noir. The narrator, feeling lost and dissatisfied in her own life, relates the bizarre story of her neighbor, Kate, in extraordinarily imagined detail. “I listen—not to the rattle of a shingle on my own roof, but to how that house of Kate’s must have echoed as she stood there in the hall.”

Michael Crummey and Bill Gaston also have stories in this issue. Crummey’s “Afterimage” is a haunting tale of a family’s strange, intergenerational inheritance, and Gaston’s “Angels Kill Hummingbirds” is also a story about family, where an uncle’s death could bring new life to those left behind. Told with his trademark off-hand humour and colloquial dialogue that speaks volumes, this is vintage Gaston. 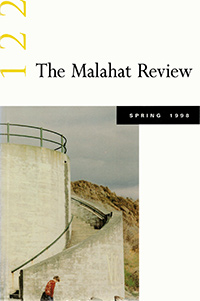