Derk Wynand taught in the University of Victoria’s Writing Department from 1969 to 2004 and had a long association with The Malahat Review. In 1979, he guest-edited a special issue (#37 January 1979) on “Austrian Writing Today” and in the 1990s he was editor of the magazine for six years. This issue—the last under his editorship—also marks a sort of independence for the magazine. Until the end of Wynand’s tenure, the editor was always also a professor at the university. Marlene Cookshaw, who was Associate Editor for this issue, took over and the Malahat editorship has been an independent position since that time.

The issue opens with Séamus Ó Ceallaigh’s 1998 Novella Prize-winning story, “O’Sheen’s Flu” which is a lyrical, smart, often funny romp through the beginning (or maybe the continuation) of a relationship. Ó Ceallaigh is not a prolific writer and this issue of Malahat is the only home for it. The story is worth the price of the back issue, if only for brilliant flourishes such as a silent conversation that takes place through the gestures of each character over an Irish breakfast:

Fiachra brought two segments of black pudding together in a way that said, You don’t know everything.

Bridgette coughed into her napkin. You’re awkward and childish, and your hair is a mess, and you’ve a hole in your sweater.

Fiachra scraped egg from the knife to the fork. I read his diaries.

Bridgette spread her napkin across her lap. Honey, I wrote his diaries.

Pain Not Bread (the collaborative poetry writing collective of Roo Borson, Andy Patton, and Kim Maltman) are back in Malahat with eleven more poems from what will become their important work, The Introduction to the Introduction to Wang Wei.

Toward the end of the issue, there is a story by Sean Virgo called “Introduction to The Undiscovered Country, a collection of stories” which is the same length as the Novella Prize winner and which cleverly questions structures since the introduction also is the story.

David Solway, Ryan Knighton, Kathryn MacLeod, and Adam Chiles have poems included in #123 and there is a good selection from Patricia Young’s Ruin and Beauty, including the titular poem from that book in which she says that we are like our ancient ancestors with wolves foraging among us, “just another species / looking to the stars and howling extinction.” 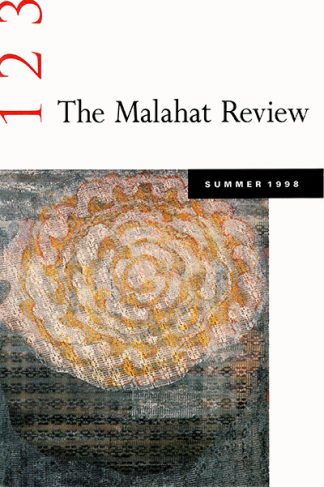