This issue features a balance of poetry and prose. “Permissible Words,” the opening story by Joan Givner, centress on a game of Scrabble between a grandmother and granddaughter. As the game progresses, it becomes clear the granddaughter is taking refuge with her grandmother after a family upheaval—her father has left her mother for a handsome younger man, and neither parent is currently fit to care for her. Givner has a way of exposing a bit of information while hiding the rest, so that the end of the story leaves us in the same in-between world as the granddaughter.

Patrick Lane follows with eight poems. The first, “The Hour of the Crane,” stands apart from the others with its brevity and simplicity. With the line, “Welcome, welcome,” it ushers in the set of seven that follow: “Small Birds as Rare as Wisdom,” “The Window,” “The Floor,” “The Rug,” “The Sound,” “The Attic,” and “The Bathroom.” Each poem has a self-reflective narrator who seems to see his whole life within one room, one object, as in “The Attic”: “What remains, / reminds, returns, all things never used / I have stored in the worn / wooden crate in that room / far above me, the one I enter / when no one is here.”

Further on, Sue Sinclair’s “The Navel,” “Collarbones,” and “Heat Effects” take on a similar tone to Lane’s in that they examine the ordinary as something larger and timeless. Sinclair’s poems allow more visual breathing room with shorter, succinct lines and stanza divisions, as in “The Navel”—“a galaxy winding / into itself / anything that disappears.”

Also in this issue is Sonnet L’Abbé’s “Winter Olympics,” a poem composed of rhyming quatrains that mimic the demanding form of ice-skating, and Al Purdy’s “The Girl at Scara Brae,” about a 5,000-year-old body unearthed on the Orkney Islands.

Norma de Pledge, a former instructor at the University of Victoria and Camosun College, contributes a funny and witty story, “Accordingly my personal experience and also very thank you Tillie Olsen.” The narrator, a woman who writes in “broken language,” struggles with self-confidence and validation. She argues with herself, “Better time spend for sensible. Job job no foolish. No one look for big meaning in pile of laundry. No one disappoint from that. Maybe me only, but this is from too big idea in my britch.” Through her writing style, de Pledge manages to express the fear of failure that many writers experience. 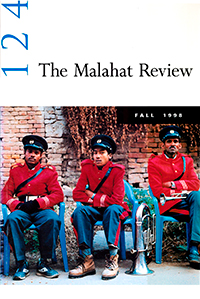