Featuring impressive and engaging works by thirty-four contributors, issue 125 begins with four poems by Don McKay, whose 1997 book, Apparatus, was shortlisted for the Governor General’s Award. Other award-winning authors in this issue include Stan Dragland whose criticism won the 1995 Gabrielle Roy Prize for Canadian Literary Criticism; Elizabeth Philips, whose work has won Saskatchewan Book Awards for poetry; and Rhea Tregebov, a recipient of the Readers’ Choice Award for Poetry from Prairie Schooner. Their pieces in this issue are true highlights of literary art. Other highlights include two poems written by Susan Gillis and John Newlove’s poem entitled “An Old Man, Waiting.” In Newlove’s poem, the subject is a man as he ages, contemplating his past, present, and future. Also of note are compelling stories written by Vivette J. Kady, Nick Sumlak, and Christopher A. Taylor. M. Arnott’s poem, “Buying a Horse,” captures the feeling of desire, and Gerald Hill’s “In Carnation” encapsulates a new beginning. Rounding out this inspiring issue are intricately complex poems by Benjamin Scott Grossberg, Constance Merritt, and Karen Mulhallen. 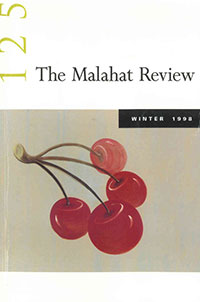