In this issue, poetry by writers who were, or who have come to be, important figures in the Canadian writing landscape sit alongside fresh fiction by emerging voices. The writing group Pain Not Bread, made up of Roo Borso, Kim Maltman, and Andy Patton, contribute six poems taken from Introduction to the Introduction to Wang Wei. Pain Not Bread were winners of the 1993 Malahat Long Poem Prize for this work, and here we have six poems from the piece, with a brief introductory note giving context. There is a similar contextual note from Peter Dale Scott, who introduces his excerpt from Minding the Darkness, a book-length work released in 2000, which completed the trilogy that started with Coming to Jakarta and Listening to the Candle. There is also poetry by Don Coles, Carole Langille, and Maggie Helwig, as well as a quietly moving poem by Kate Braid, a domestic piece that takes an ‘ordinary day’ and looks carefully at the “wonder, really, at the luck of it.”

The fiction selections include two atmospheric, turbulent pieces that each examine a problematic family relationship in careful detail. Nicole Fronteau’s “Halfmoon Bay” tells the story of a young girl living a precarious existence with her mother; in this story, the child’s voice is both frail and powerful, her vulnerability highlighted deftly. N. J. Tooke’s “Temperament” is a lengthy story that presents us with different ways of seeing, and the possible dangers of a certain kind of intimacy and closeness. A blind elderly man is the protagonist in this tale of complicated family histories, unspoken truths, and the compromises we make in long-term relationships. These are striking pieces, made more remarkable by the fact that they are first publications for both authors.

The issue also includes an extract from Grant Buday’s novel White Lung, a zippy little scene that flies off the page. Buday’s novel was released in 1999, with Anvil Press. Reviews include Michael Kenyon appreciating Bill Gaston’s “mysterious, spiritual” Sex is Red, and Joan Giver’s review of Anne Fleming’s Pool-Hopping and Other Stories, a collection that was a finalist for the 1999 Governor-General’s Award. 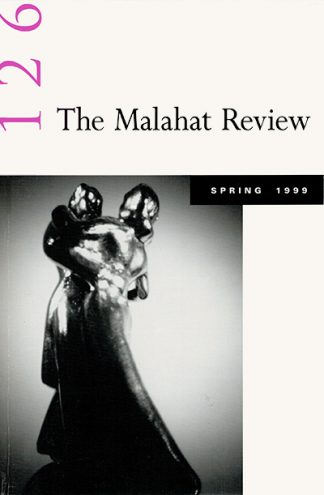