With its bright yellow cover art, issue 127 brims with literary work that leaps from the page with emotion. Included in this issue are six moving poems written by Julie Bruck, which won her the Gold National Magazine Award for poetry that year. Bruck’s first collection received QSPELL’s A. M. Klein Award. Bruck’s poems published in this issue range in their thematic elements, including one that playfully incorporates tropes from Elizabeth Bishop’s poetry.

Also in this issue is the Silver National Magazine Award-winner in poetry, Shane Book. In Book’s poem “Dust,” the speaker moves between depicting a relationship with a dying grandfather and a new lover. In addition to the Silver National Magazine Award, Book’s “Dust” was also honoured as The Malahat Review’s Long Poem Prize winner. Sonnet L’Abbé’s “Hiatus” was the other Long Poem Prize winner that year. L’Abbé has also won the 2000 Bronwen Wallace Memorial Award, and her work was shortlisted for the 2010 CBC Literary Award for poetry.

Like other issues of The Malahat Review, issue 127 includes works by award-winning and soon-to-be-award-winning authors, including two short stories by Annabel Lyon whose debut novel, The Golden Mean, won the Rogers Writers’ Trust Fiction Prize in 1999 and P. K. Page, who has a poetry prize in her name that is awarded annually by The Malahat Review. 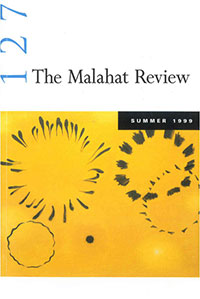