An interview between Eleanor Wachtel and Adam Phillips, a British psychoanalytic writer, begins this issue with a captivating conversation about the use and limits of psychoanalysis, Phillips’ other work, and the connections between psychoanalysis and literature.

Timothy Taylor’s narrator in the short story “Doves of Townsend,” takes the reader on a journey through flea markets and grief. This story won the Writers’ Trust of Canada/McClelland & Stewart Journey Prize and a silver National Magazine Award in 2000.

Kim Bridgford, a recipient of a fellowship from the National Endowment for the Arts in 1999, contributed a sonnet sequence entitled “The Cancer Sonnets,” which are heartrending and touching. H. Mel Malton’s short story, “Flood,” traces the experience of the protagonist, Lily, as she travels back to a place full of memories. Malton’s first book was shortlisted for the 1999 Arthur Ellis Award.

Other highlights in this issue are a poem, “Calendar,” written by Bridget Wayland, a short story entitled “Take My Picture” by Jan Short, Marjorie Power’s poem “Burial of a Signature,” and Anita Olachea Bucci’s poem “A Certain Distance from the Station.” 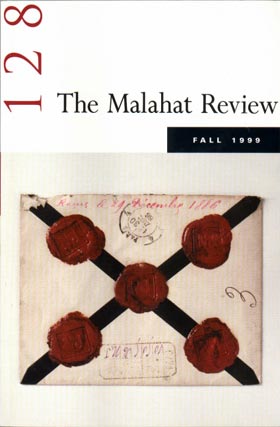