I am one of those people who believe that writing can be taught. There are hundreds of thousands of students taking creative writing classes in academic institutions all over the world, and though we know that they won’t all go on to win the Nobel Prize, they develop communication skills that will be, at least, useful in this communication-oriented world. In any of those classes there is, sometimes, a student that just shines. The last story in this issue is “Alchemy,” written by then twenty-five year old UBC student Madeleine Thien. The story makes clear that she is one of those brighter lights. “Alchemy” is about two tenth-grade students, Paula and Miriam, who are discovering themselves and their sexuality. The story is polished and deft and there is richness here that is not common. Thien invokes bulimia and it seems at first as though that eating disorder may become the theme of the story, but then it transforms into a symptom of something much larger. The writer seems to know just what questions to leave unanswered, and the ending is wonderful. Read this early story and you will see why Thien has become as successful as she has.

This issue is wealthy in fiction. Other stories include Niki Sing’s “Dance,” about immigration, dance, and parenting; Jean McKay’s “God and Mr M.,” which will make you consider Barbie in new ways; Judy Smith’s very short story, “Levitation”; Chris Fink’s farm baseball story, “Barnyard Billy Licks the Grass”; and Elizabeth Moret Ross’ “Audrey’s Body Care,” which is about an esthetician who can’t take care of herself. In Christopher A. Taylor’s “Distance” a man takes his daughter to the park and avoids a close call, only to make his own kind of trouble later.

Another one of those bright lights in this issue is Mark Anthony Jarman— established by 1999 as one of many literary luminaries to have emerged from the Iowa Writers’ Workshop. His story “Eskimo Blue Day” is a good example of his work. Both gritty and poetic, Jarman’s language draws us in to all of the story’s surprises.

One of my favourite poems in this issue is Sue Sinclair’s “Upstream,” which begins:

Pouring over the weir, the river

is time reversing. The trout that flash

silver out of the water are splitting

seconds, infinitely, until the fragments

are so small you can’t see them, invisible

flicks of light from their tails.

After this poem, rivers will never be the same again.

There is always purpose behind the arrangement of work within the magazine. So Sinclair’s third poem, “Grazing” (“The prairie lies belly-up / in the sun…) faces the page where the “Barnyard Billy” story begins. Toward the end of the issue, Sue MacLeod has two poems. The second is “This is a poem where words are the underpaid workers” and it is followed by Tom Wayman’s thematically similar “What A Word Lacks.” There are poems by Sharon McCartney, Liz Waldner, Vivé Griffith, Dilip Ninan, Miranda Pearson, and others. Richard Lemm, a dedicated cultural worker from PEI has a poem in the issue, as do the similarly dedicated David Zieroth, and John Reibetanz. Former Malahat editor Derk Wynand, who presumably has had some time to write again by 1999, has a poem in the issue called “Deadhead”. 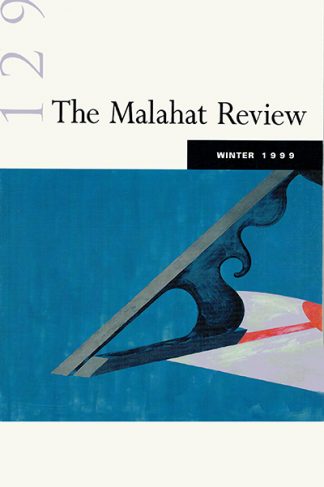