The relatively high number of contributors to this issue is largely due to the many poets represented, often with a single poem each. They are fine poets, and fine poems, and I’ll address some of them further on in this review. For me, however, it is the short fiction that completely captivated my attention and left me thinking on these stories long after.

Sam DiFalco’s “Two Cups” is a vivid character-driven profile of Mike Crea, who, on the morning of his sixtieth birthday, “got out of bed early and shaved off his moustache.” This small act is met with scorn by his wife and his mother and seems to set off a chain of misfortune, including the death of his wife’s cousin. The interactions of his Italian-Canadian family are hurtful on the surface but Mike quietly endures and accepts that much of it is firmly grounded in love. “So long as you don’t think too much you could float through it like a turtle in a tub.”

Libby Creelman’s atmospheric “A Walk in Paradise” also explores the difficult family dynamic. A woman who may or may not be separated from her husband is visiting her parents, her two sisters, and her sisters’ young children, with her own “difficult” daughter in tow. A simple walk through thick fog into town becomes tense with squabbling and potential mishap. Dialogue is weighted by what is said, and, we sense, by what is left unsaid.

For sheer dramatic tension, however, Kenneth Fraser’s masterful “Television” is a tour de force. It is a coming-of-age story that, with its powerful ending, also signals life cut short—or at least changed forever. Set in the British Columbia interior region, somewhere near Kamloops, it’s recounted by the son of the local grocer who has, the day after the Kennedy assassination, acquired the town’s first television set and placed it in the shop to attract customers. From the moment it’s installed, all it attracts is trouble and violence. Even when the television is sold to someone else, trouble follows—and escalates. Innocence is lost. Authority figures are not to be trusted. Make believe blurs with reality. “The television would carry on chattering no matter what happened in this house. Flames could burn us up and the Friendly Giant would smile and Jerome would chuckle and Rusty would play the harp. They didn’t care, they didn’t care. I felt a cold shadow, the chill of knowing.”

The other prose in this issue is a piece of nonfiction by poet Don Coles. In “Biographies of Writers: A Partisan View,” Coles admits to his fondness for reading literary biographies, detailing why they appeal, who some of the better biographers are, and which to avoid.

As I said, there are many poets represented in this fine issue and it’s impractical to mention them all here, let alone quote from them. A few are familiar names, still writing and publishing today: Barry Dempster, Donna Kane, Susan Gillis, Sandy Shreve, Jeanette Lynes. There are a few “foreign” names, notably Benjamin Scott Grossberg and Robert King from the U.S. The editors have, as always, done a fine and delicate job of placing poems within the issue so as to echo subtle themes from neighbouring works, such as Laisha Roshnau’s “Haircut, Age Eleven” beside Mark Cochrane’s “Outage,” with both poems concerning the awkwardness of pre-pubescent sexuality. 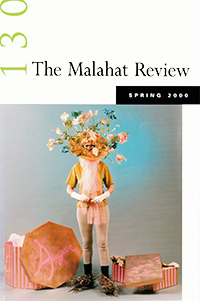