The entire first half of this issue is filled by the winner of Malahat’s Novella Prize, which means that 12.5% of the year’s Malahat page quota for fiction and poetry is this one story. “The Deep,” by Mary Swan, was later published by Porcupine’s Quill, Granta in the UK, and by Random House in the U.S. Your question here should be, “Is it worth it?” and my answer for you is, “Well, yes it is.”

“The Deep” also won the “O. Henry Award,” probably the best recognition any single story can find. True to the name of that award, “The Deep” has a twist at the end that will send readers back into the story to look for signs. It is an orchestral piece of writing; told in scenes or “vignettes” of various lengths and through a chorus of voices, the story experiments with voice and with form and shape to unfold the tapestry of events. The language is poetic. The setting is the First World War. The two main characters (twins who speak with one collective voice) set off from their home in Britain to the battlefields of France to be useful. They encounter the horror at the front lines of that war, and Swan conveys it vividly.

The second half of this issue is poetry and there is a strong showing by east coasters: John Steffler, Anne Simpson, Michael Crummy, and Ross Leckie. Steffler is always impressive. His selection here is from an archival project in which he began by looking at archival photos in the Colonial Building in St. John’s and was “fascinated by the ways [the place has] been looked at, by what the viewers have selected and extolled.” The poems included here are a snapshot of the larger project that investigates the idea of place and landscape.

Other poetry highlights include Sina Queyras’ “In the night, suddenly” — a sensual five-poem sequence; Ruth Roach Pierson’s surprising and somewhat surreal poems; two neat poems by Ed Leeflang translated from the Dutch by Pleuke Boyce; and two poems by then-maritimer Eric Miller, which are at once cerebral and human. 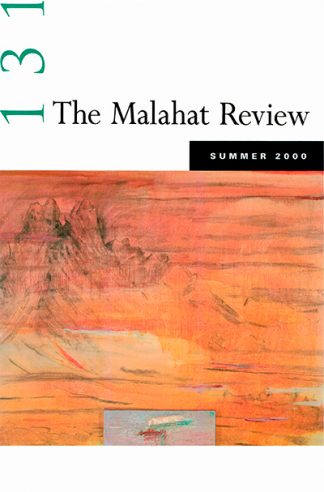