Have you ever gone back to your old stomping grounds, only to realize that everything has changed since your last visit? In the first of four poems by Karen Solie in this issue, the author muses how, “decades ago, camping here with family, sweetgrass / and the book of stars seemed a gracious guide / to being in the world. Now you are merely something for a deer to avoid.” Her other poems, which are titled “Thanksgiving,” “Early in Winter,” and “Real Life,” echo the same nostalgia that comes from moments one often takes for granted. Solie has won numerous awards, such as the acclaimed 2010 Griffin Canadian Poetry Prize and the Latner Writers’ Trust Poetry Prize in 2015. In addition, her work has appeared in the anthology, Breathing Fire: Canada’s Newest Poets.

Sarah Cassidy also graces the pages of this issue with two poems that pull at the heartstrings. With several awards and published works on her extensive list of achievements, this Victoria resident is no stranger to the process of writing. In the lines of her two poems, “When You Walk in Your Sleep” and “Evandale,” she masterfully tackles how mental health can affect marriages, as well as secrets often hidden in a community.

There is a diverse range of fiction writers here, including George Bowering, who has been honored with both the Order of Canada and the Order of British Columbia, Katherine Vaz, whose works have been recorded for the Library of Congress, and Mexican writer, Ricardo Martinez Cantú. One common theme that connects all of the fiction contributions with the poetry is how we relate to the world around us. In “Standing on Richards,” Bowering’s narrator sells his thoughts to complete strangers in downtown Vancouver. For fifty dollars, he will talk about the Austro-Piedomentese War, for example, but one client is puzzled why anyone would be willing to sell his mind. His answer?  Brains are individualistic, and that sets them apart from Google and dictionaries.

The book reviews include one by Jay Ruzesky of Michael Winter’s “fictional memoir,” All This Happened. With an unreliable narrator, the author explores the territory between “where life ends and craft begins.” 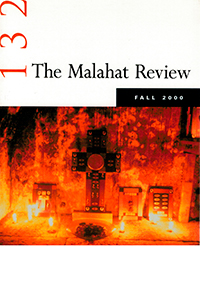