Steven Heighton’s prose piece “The Age of Clowns” is the first item in this issue. It is an unusual and interesting blend of story and essay, part autobiography and part cultural criticism. The piece follows the author as he embarks on a footrace against costumed opponents, and as he reflects on the state of contemporary thought. “The Age of Clowns” is followed by Patricia Young’s short poem “Days of Summer,” and these two pieces set a precedent of literary quality met by the rest of the issue.

And be sure not to miss “adios piazzola,” a short story by Chilean-Canadian writer Carmen Rodríguez. At less than three pages long, “adios piazzola” is very short, but contains a lot of story and emotion condensed into vignettes—a Chilean expatriate tries twice and fails to see the famous musician Astor Piazzolla. The story is told against the political backdrop of Pinochet’s military regime in Chile.

In addition to these excellent prose pieces, this issue also contains some strong poetry: John Steffler and David Zieroth each contribute three poems to the issue, and Susan Goyette makes an appearance with her one-page poem “The moon on Friday night.” Goyette’s poem is a brief, atmospheric lyric poem, full of magical images of light and dark, about “women who speak the vernacular/ of loneliness.”

Also in this issue is an interview by Eleanor Wachtel with Jeannette Winterson. The two mainly discuss Winterson’s fiction, with some interesting topics such as the nature of language. Winterson’s responses to Wachtel reveal the wide scope of her knowledge and reading on various subjects—for example she mentions Chaucer, Woolf, and Robert Graves as her current reading list—making the interview enjoyable reading even for those who don’t know Winterson’s work. Near the end of the issue is a review of Timothy Findley’s plays “The Stillborn Lover” and “The Trials of Ezra Pound.” Written by Michael MacLennan, this review is notable since it deals with drama, rather than the novels for which Findley is primarily known. 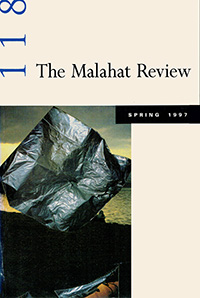