Issue 18 is rich in humour. In the popular section, “An Atlas of Poetry,” German Reiner Kunze’s “The Bearers of Beethoven” conjures Kafkaesque comedy while “Sercambi’s Novella of Avarice and Lust” (translated from the medieval Italian by Joseph Ranallo) delivers a four-page amusement about a conniver’s stratagems against an insatiable woman. Alisa Weinrich’s “The Discontented Wife” sees a priggish and ornery newlywed plopped into an affair that gives her bafflement and guilt of happiness. Improbably, the fling helps save her marriage.

Elsewhere, Lucien Stryk’s “Shinkichi Takahashi: Contemporary Zen Poet” finds the author elucidating on the poetic workings of his subject and the role Buddhism has long played in Japanese poetry, both explicit and implicit. Four poems by Takahashi graciously preclude the piece.

Editor Robin Skelton’s Introductory Note to Kathleen Raine’s “The Faces of Day and Night” details how this work, extracts from two essays and memoirs, was almost lost. Raine captivates in her childhood reminiscences of elaborate pastoral and church descriptions before turning the focus to a riveting incident of a bull in the adjacent farmland.

Dorothy Livesay, who was at that time teaching at the University of Alberta, contributes three poems, while further in “An Atlas of Poetry,” Sweden’s Tomas Transtromer’s “The Couple” contains breathtaking lines such as: “The hotel walls shoot up into heaven’s darkness.” Robin Skelton also industriously critiques the life and sculptural works of Victoria artist Elza Mayhew whose work is represented by sixteen pages of photographs. Fredelle Bruser Maynard’s ‘The Silk Umbrella: A Memory,” is a lament about her immigrant father—his quixotic life and slow decline.
This issue wraps up with reviews of new poetry books by Michael Ondaatje (The Collected Works of Billy the Kid), Kenneth Rexroth (Love and the Turning Year: One Hundred More Poems from the Chinese), Ted Hughes (Crow), a short fiction collection (Godded and Codded)by Julia O’Faolain, and a book of essays entitled [T.S.] Eliot In Perspective. 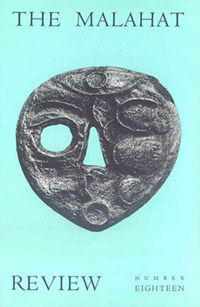