Issue 17 is chock-full of memorable content. Paul Theroux contributes a piece called “The Liberal,”one of his earlier short stories. This issue also includes the segment “Five Irish Poets,” showcasing work from Seamus Heaney, Thomas Kinsella, and John Montague. Finally, this issue closes off with an interview with Anthony Burgess. This insightful discussion covers topics ranging from his most famous novel, A Clockwork Orange, to sex and masturbation. He talks of his future plans, his past work, and everything in between in this fascinating transcript. Burgess also contributes a piece of writing to the issue: a portion of his translation of the play Cyrano De Bergerac by Edmund Rostand. The cover art is a detail of Herbert Siebner’s painting The Day It Happened. 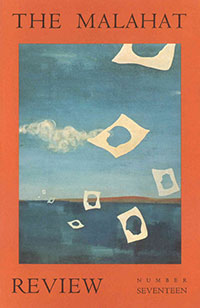