The poetry and fiction in Issue 16 are both anchored to an alien land, a land of margins. We, the readers, are always in the presence of the disconnected: Dugan Gilman’s blind man, drinking under a bridge; Rosemary Silverman’s Nanine, lost in old countryside, in childhood memory; and, of course, the greatest misfit of them all, Jorge Luis Borge’s Billy the Kid. Travelling from poem to story to poem, we become wandering protagonists of our own volition.

In poetry, the lovers in Joyce Carol Oates’ “Public Love” are rooted to the earth through their disintegration. Further on, Sam Bradley’s whale skeleton, too, seems suspended in a liminal space, hung from the ceiling of a natural history museum.

Eugene McNamara’s short story, “Down the Road,” is set in a suburban wasteland uncannily reminiscent of the isolated Western landscape in Borges’ “The Disinterested Assassin” (a translation by Anthony Kerrigan). In “The Shoelace,” a play by W. B. Yeats’ patron, Lady Gregory, a wandering minstrel’s existence almost appears, as one character remarks, to have been entirely dreamt of.  The published text of the play is edited from Lady Gregory’s typescript by Anne Saddlemyer.

The largest section of this issue is devoted to the behind-the-scenes story of the art direction and staging of Yeats’ plays at the Abbey Theatre in Dublin, with Liam Miller detailing the history of the costume and set designs. Folding and cutting back into its angles, D. Travers Smith’s curtain, used in Fighting the Waves, draws power from its own movement. In contrast, Robert Gregory’s lazy brushstrokes paint us a softened, hazy image for the setting of Deirdre. Gordon Craig’s costume for The Hourglass takes inspiration from traditional Japanese Noh plays, with a sketch of the actor’s mask featured on this issue’s cover. Also included are costume drawings and sketches by Charles Ricketts, Jack Yeats, and Sean Keating. 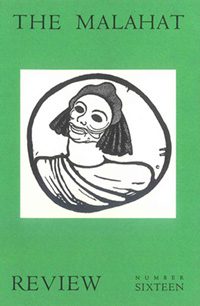