Rightfully, one-third of the fifteenth issue is dedicated to representative letters from Richard Aldington to Herbert Read, written between 1919 and 1961, though heavily weighted in the earlier years. Their warm friendship, based not only on acclaimed writing but also on shared WWI experiences, is intellectual and worldly—even if Read’s voice appears solely in contextual counterpoint. It’s compelling to read Aldington‘s thoughts and feelings about colleagues (and, at times, friends), such as Ezra Pound, James Joyce, and particularly, T. S. Eliot. Aldington and Read (who was well-known as an art critic), were industrious men who consciously explored philosophy within their lives, and this is woven into the letters. David S. Thatcher’s thoughtful introduction posits that Aldington and Read held a lifelong mentor-protégé relationship.

In poetry, Gary Geddes’s “Media” demands rereading. Margaret Atwood contributes four slices of her fine craft, while American Burton Welcher enlivens us with his abrupt cadences in the quirky, “The Incident.”

Prose-wise, Latvian-born Andrew Fetler offers “The Mandolin,” a plaintive story about a bride coming to the realization of her rudimentary function within her husband’s communist life. Joyce Carol Oates’s “Through the Looking-glass” focuses on the happenings between emotionally-remote teacher, Father Colton, and a mature divorcée student who sincerely questions the curriculum rather than gulping it for scholastic credit.

Elsewhere, editor Robin Skelton critiques eight paintings (black and white reproductions included) by Michael Seward Snow, citing extensive quotes by the artist, and later, a host of reviews by Skelton and fellow editor John Peter give us a snapshot of what was hot off the presses at the turn of the decade, including Margaret Laurence’s story collection, A Bird in the House. 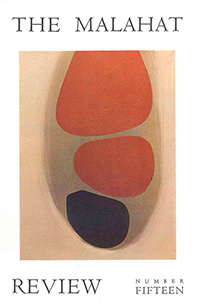