This issue is a delightful exploration of literature and art from around the world. India-born Aijaz Ahmad collaborated with poets William Hunt, Mark Strand, William Stafford, and others, in translating a selection of ghazals (from the Urdu) by Ghalib, six of which are published here. Hagiwara Sakutaro brings a sense of Japanese community and naturalism to life with five poems translated by Graeme Wilson.

An insightful collection of previously unpublished letters by the Northern Irish poet and thinker George William Russell, otherwise known as AE, detail his struggles in politics, philosophy—particularly Theosophy—and publishing. This selection of letters is edited by Henry Summerfield, a long-time professor of English at the University of Victoria. Canadian poet Robert E. Hawkes’ poem “Retribution” speaks of the all-encompassing futility of war, while Toronto native, Edith Shiffert writes an equally melancholic contemplation on the universal suffering of man and beast in her poem “Looking at Photos Taken of Wild Monkeys.”

Central to this issue, however, is an affectionate portrait of the great American photographer Edward Weston by his apprentice and daughter-in-law Dody Weston Thompson, who first met him in 1948 when he graciously invited her to his Carmel, California home. Eighteen black and white photographs by Weston (including a nude portrait of his wife that also graces the cover) provide brilliant examples of his masterful work. 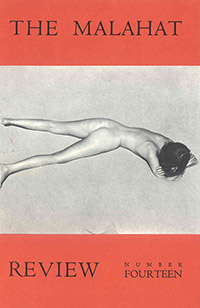