Issue #13 brings us into the fourth year of The Malahat Review and this issue has a little bit of everything. First up we have “Turnip Fields” a poem by Canadian poet John Thompson, whose tragic death occurred just six years later. Other poets of note include Austrian poet, George Trakl, whose poems are translated by Max Wickert, as well as Hayden Carruth and Kathleen Raine.

There are a number of short fiction entries in this issue, each focusing on the details of a small moment in time. The first is called “The Deeper Shadow” by Jack Matthews, an exquisite description of a tent and the quiet life that surrounds it.  “Buy Something,” by Norman Nathan, follows a woman and her thoughts on a walk through New York City. This piece could almost be described as a character sketch.  Finally, in the short fiction section, is “Abracadabra,” by Jarvis Thurston. While the story focuses on a man who has just lost at the races, the story is really about the act of lying.

During Robin Skelton’s time as editor, The Malahat Review always contained black and white plates featuring the work of a well-known or up-and-coming artist.  This issue features the work of Cecil Collins, an American artist. In his brief introduction, Skelton calls Collins “one of the great visionary painters of our time.”

Finally, in this issue that contains a bit of everything, is a continuation of issue #12’s “Speaking of Byron.”  These are further letters from Joanna Baillie to Sir Walter Scott.  The letters are footnoted with many details so the reader is able to draw better connections and see the whole story of Lord and Lady Byron’s relationship and also recognize the literature to which Baillie constantly alludes. 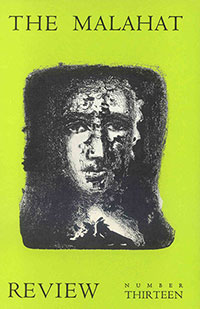