As the last of the decade, the twelfth issue of The Malahat Review is a testimony to the artists of the nineteenth century and how their works have remained an inspiration to writers a century later. With a variety of wonderful contributors, this issue showcases riveting poetry, fiction, essays, and more.

C. L. Lambertson provides edited copies of previously unpublished letters written by Joanna Baillie (nineteenth-century poet and dramatist) to the better-known poet and playwright, Sir Walter Scott, concerning Lord Byron’s separation from his wife. Starting with the effects of the Battle of Waterloo, Baillie provides firsthand accounts that are sure to intrigue history buffs and literary fanatics alike. For those interested, the letters continue in the following issue of The Malahat. Also in issue number twelve, Robert Fagles (1933-2008) presents his poem “Crows Over the Wheat Field,” which was written in response to the painting of the same name by Vincent van Gogh. Perhaps best known for his acclaimed translations of the Greek and Roman epics, Fagles is also remembered as a poet and academic. In addition, Christopher Ricks, a highly accomplished literary critic and scholar, contributes an essay on the works of the Poet Laureate Lord Tennyson and argues that this Victorian was a love poet.

While the works above deal with nineteenth-century influences, there are many that reflect the contemporary works of the 1960s, including eight black & white photographs by Roger Pfingston, created without the use of a camera by mixing India ink, oil, water, and sometimes even jelly on a three-inch plate of glass. Additionally, Barbara Jump returns to The Malahat Review (her works also appeared in issues three and seven) with her story “A Haunt of Storks.” The infamous British poet and novelist Kinglsey Amis gives us insight into his creative process by sharing his worksheets for all eleven versions of his poem “South.” 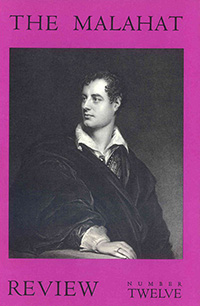