Robin Skelton’s introduction comments on the state of literary magazines and printing costs. Skelton appeals to readers of The Malahat Review to consider the situation, stating that the only way for the magazine to survive is to receive “massive support from its readership.” The serious economic state of the magazine in 1974 is offset by the dreamy and textured quality of the writing within.

John M. Gogol introduces readers to Osip Mandelstam, a Russian writer whose work is featured three times; two essays focus on the relationship between culture and literature, and three octets appear in Russian alongside their English translations.
As in all the early issues, this one includes a selection of artwork—twelve colour and black-and-white plates featuring the artwork of Carl Morris (1911–1993) can be found in the centerfold. The plates are accompanied by a short introduction by David Wagoner (1926–) on Morris’s work.

One piece of particular note is “Dream of the Oyster” written by Michel Butor (1926–) and translated from the French by assistant editor, Derk Wynand. This particular “dream text” alludes to texts by Chateaubriand and Benjamin Constante.  It follows a stream-of-conscious style that traces a surreal, dream-like adventure. 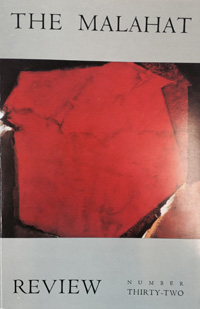