Print edition of Malahat Review Issue 41 (January 1977). This issue is not available for online purchase due to low stock. Please contact The Malahat Review at malahat@uvic.ca or 250-721-8524 for more information.

It’s enough to make you ask: when did Margaret Atwood attain her unassailable canonicity in CanLit, anyway? As the first published critical collection devoted to her works, the January 1977 Malahat Review symposium captures exegesis, an interview of prickly laughter and PR-savvy, and even a cantankerous beer-spraying fight. Published before The Handmaid’s Tale, Cat’s Eye, or Alias Grace — that is, well before we and the rest of the English-speaking world made dear Peggy a living synonym for Canadian literature — this symposium helps animate the times and characteristics of the young Atwood who’s since been partially eclipsed by her own later accomplishments and presence.

In the symposium, George Woodcock, then-editor of Canadian Literature, takes issue with the survival-or-victimization logic of Atwood’s primary argument in Survival, but also affirms the collection as solid grounds from which Atwood, among others, step beyond at the threshold of their creative work. Jane Rule explores how Atwood’s early feminine protagonists dance with men, food, language, and their own self-images as they seek nothing more extraordinary than “normalcy.” And there are times in Rosemary Sullivan’s interview that you wonder if Peggy isn’t going to pull a knife on the poor dear if Sullivan asks another silly question about something a male critic has said about her. Thankfully, Atwood’s wit, tongue, and social analysis prove sufficient, and a bond of understanding emerges over the course of the interview.

And then there’s beer. Everywhere, apparently, when Atwood doused Al Purdy with several bottles worth of brew. He retaliated by spraying her with more beer, and lake water, before they found creative ways to make up and mistrust each other less.

Though this 1977 collection can’t claim the authoritative status of knowing about Atwood’s more recent accomplishments, it’s a fine and frequently fun glance backwards at the stories and elements that predate the stately mythology we’ve made of Margaret Atwood. 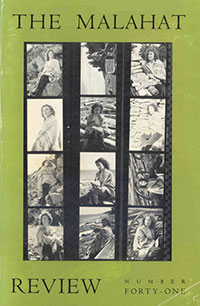