The issue begins with Scottish poet Ruthven Todd’s (1914-1978) memoirs. Todd paints a picture of an earnest young man trying to break onto a lively literary scene in the 1930s. His sense of humour and humility shine through as he gently pokes fun at his early poetry and describes his experiences rubbing shoulders with the likes of Salvador Dali, W. H. Auden, and Dylan Thomas, to mention only a few! Todd’s stories are sure to fascinate both literati and casual readers.

On the poetic front, two talented women stand out. Diana Hartog’s (1942-    ) five poems break down everyday moments into their intimate minutiae and convey emotions piece by gravitas-drenched piece. Hartog has now written four books of poetry, three of which have won or been nominated for awards. Helen Humphreys (1961-    ) uses arresting line breaks and straightforward language to her advantage in her single poem “Circumstantial Removal.” Humphreys, who was 21 at the time of publication, is now a celebrated writer with six novels, four books of poetry, and two creative nonfiction works. She has received numerous accolades, most recently the Harbourfront Festival Prize for literary excellence in 2009.

Of course, the poets in translation are not to be left out. Miroslav Holub (1923-1998) contributes five poems translated from the Czech, in which he crafts vivid and sometimes disconcerting imagery and imaginings. He playfully warns the reader against overanalyzing his work in “Dreams”: “Yes, grass. / Grass without a double meaning. / Unambiguously grass. / Just grass.” Holub was a remarkable individual who published numerous books of poems, puppet plays, and essays—all while working his “day job” as a research immunologist. He completed his M.D. in 1953, and his scientific knowledge comes across in his poems “A Natural History of Arthropods” and “Hominization.” The latter is a minimalistic exploration of what it means to be human, reverentially centred on “Lucy”—a 3 million-year-old Australopithecus afarensis skeleton, discovered in 1974. Also in translation is Giovanni Raboni (1932-2004), an Italian poet who plays with irregular spacing within a traditional structure in his six short pieces.

With regards to short fiction, stories of all sorts are on offer and every kind of reader is sure to find a favourite. From John Schoutsen’s (1956-    ) hilariously surreal “Thursday Morning Mothers” to Jack Matthews’ (1925-2013) brief and bleak “Their Allegiances,” each piece is full of personality. For fans of the unorthodox I recommend his fourth-wall-shattering tale of “Edward Colburn,” a character who is described as “an arbitrary and evanescent grouping of words,” and “made up in a strange little story.” More traditional in style, Don Dickinson’s (1947-   ) “Novillero” is a portrait of a blues singer struggling to relate to his estranged wife and son. The sun-soaked backdrop of an unnamed Spanish city conceals layers of regret and bitterness that reveal themselves only fleetingly in this gently tragic story of a family coming apart. Along a similar vein, Montreal writer Robyn Sarah (1949-    ) brings us “Purgatory,” about an extra-marital relationship caught in limbo. The reader is in good hands with Sarah, who has received numerous literary awards, notably from the CBC. Finally, J. W. Derij’s (1951-    ) “Postage Stamp” portrays a contrast of class as an uneducated piano tuner enters the household of two anthropologists and is stunned by the beautiful, intriguing odds and ends within—much as I felt while reading this issue! 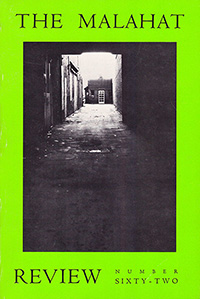