Number 64 is the final issue of The Malahat Review to appear under the stewardship of Robin Skelton (1925-1997). One cannot help but feel that this issue holds special meaning for him, thus, making it a must-have for readers’ own collections. In this bountiful edition, Skelton becomes a subject in Peter Milroy’s photographic series “A Portfolio of Writers.” No fewer than thirteen provocative black-and-white portraits grace the pages, including the cover shot of Kathleen Raine (1908-2004).  Other subjects include Elaine Feinstein, Leon Rooke, and Elizabeth Jennings (1926-2001).

Lovers of poetry will delight in works from Canada, Great Britain, USA, Australia, Austria, and Poland. Local fare comes by way of renowned poets Lorna Uher (Crozier), recipient of countless awards including the Governor General’s Award (1992), and Linda Rogers, Poet Laureate of Victoria (2008-2011) and recipient of the Stephen Leacock Prize for Poetry (1994). Poems of note include Crozier’s “What the Mind Turns Over” and Rogers’ “Equinox.” International poetic contributions include the lyrical verse of Sándor Weöres (1913-1989), one of Hungary’s greatest twentieth-century poets; a fascinating commentary on censorship and intolerance by Cuban poet Heberto Padilla (1932-2000); and a discourse on change by Scotland’s Iain Crichton-Smith (1928-1998), recipient of the OBE (1980).  Anthony Kerrigan (1918-1991), famous for his translations of works by Spanish and Latin American writers including Jorge Luis Borges and Pablo Neruda, lends his linguistic skill to translating Padilla’s “Hard Times.”

Finally, short story fans will savour “The Sheikh’s Bride” by Shiv K. Kumar (India) and “Storm Glass” by Jane Urquhart. One of Canada’s most beloved writers and the recipient of numerous awards including the Governor General’s Award for English-language fiction (1997) and the Order of Canada, Urquhart explores the transformative power of memory through the eyes of a woman facing the final chapter in her own life. 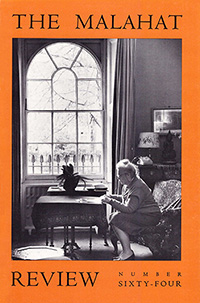